Flushed Away: The Curious Case of Sewers in Video Games

There’s a strong possibility that you do, or have, play video games. After all, the average age of the player is now 34 years old, and the rise of smartphone gaming has turned the medium into a mainstream pursuit for the many, not the few.

But as drainage experts specialising in blocked drains Derby residents rely on, we couldn’t help but notice just how many sewers feature in video games. In fact, their appearance in games is almost disproportionate to other side locations. Just off the top of our heads, we can think of 12 major games that have flushed players down the sewers – and that’s just the tip of the iceberg (or fatberg).

And it’s not just because many games are set in cities – which would make sense, given that cities have a genuine need for drainage systems. Even in wild fantasy worlds, or those set long before the Roman’s exported sanitation, gamers will still come across a sewer.

So what’s the appeal? Well, partly, it fits with how games work. Sewers can be labyrinthine in construction – take a wrong turn and who knows where you’ll end up. There’s nothing gamers like more than to have a good ol’ explore. They’re also brilliantly cinematic and full of atmosphere. Gloomy, claustrophobic locations which can destroy any player’s confidence, especially in tense shooters or survival horrors. Also, you know who’d live underground, in filthy sewers? Bad guys, of course – so it’s character shorthand. The sewer becomes a playground which adds to game’s mechanics. Developers can push gamers in a certain direction, have them solve puzzles, and feed into the overall narrative. 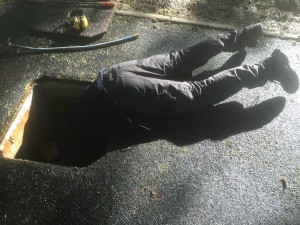 Of course, as with pretty much every art form ever, the devs take a little creative licence. Ok, a lot of creative licence. Standard sanitation drains aren’t the size of LA boulevards, with raised sidewalks on either side of a murky water-lane. There’s barely any room to fit one person down there, much less a hundred thousand re-spawning enemies who need dispatching pronto.

But at least now, the next time you’re exploring some cavernous sewer system, and wondering why so many feature in games, you have an idea! Oh, and those games we thought of? Batman: Arkham Asylum, GTA: San Andreas, GTA V, The Last of Us, Spider-man, Resident Evil 2, Silent Hill, Fallout 3, Fallout: New Vegas, Broken Sword, Dishonored, Shadow Man and most Teenage Mutant Ninja Turtles games all have sewer sequences.

If you’re having problems with your actual drainage system though, it’s probably best to bring the experts in. We’ll solve your blockage problems, and we won’t need a one-up to do it. For more info, simply contact us on 0115 822 6086 and we’ll be happy to assist with all of your enquiries.